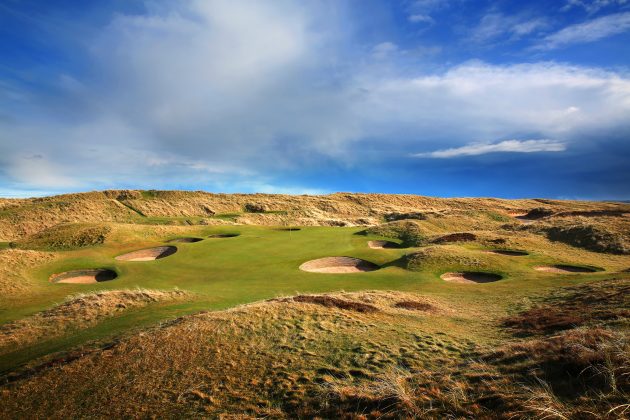 This is part of a series of articles on the golf life of five times British Open Champion James Braid. Braid is a golf legend – only Harry Vardon has won more British Open titles.

In the last three articles I’ve written about Braid’s early life and golfing achievements. This piece focuses on his golf course architecture. Braid was very fair in his fees, tailoring them to what he felt a club could afford. On occasion he would even waive his fee! Braid was also shrewd with his expenses. In his day much of the construction of a course had to be done by hand. It was therefore necessary to adapt to nature rather than move vast amounts of earth and trees. Earth scrapers drawn by chains attached to traction engines or horses were used to smooth areas designated for greens.

Braid’s theories of design were as follows:

Holes should present a variety of length, and make various demands of the player

Bunkers would be fairly large, and have every chance of attracting an errant shot

Putting greens should be well guarded

Alternative tees should be provided to enable playing conditions to be adapted to prevailing or contrary winds, dry or wet weather

Alternative routes should be provided to each hole

There should be four short holes of differing lengths

His first venture was in 1894 where he assisted Ben Sayers design the initial nine hole layout of The Glen at North Berwick.

He was warned not to make the West Hove course so difficult as that only Braid and Taylor could play it. His response? “If good players come others will follow”!

The jewel in the crown would be the two courses at Gleneagles. Braid and Col CK Hutchison were invited by the Caledonian Railway Co to submit designs to compliment the planned hotel. In 1918 the King’s course opened. The other was the nine hole Queen’s course. This was designed with lady golfers in mind. It was unveiled at the same time but proved so popular that the course was swiftly extended to 18 holes in 1920. Both courses opened some years before the hotel.

For Earlsferry he submitted plans twice. These were only parted acted upon. He also designed Lundin Golf Club’s new layout. The course lies three miles west of Earlsferry & Elie. Extra land was granted. A railway line ran between Lundin and the neighbouring Leven course. This created a handy out of bounds, which is still used. Using this and the burns Braid created an Open Championship qualifying course.

Braid also worked on Burntisland, the municipal links at Leven, Lundin Ladies Golf Club, Scotscraig, and Dunfermline at Torryburn, which is now disused.

In 1927 Braid and John R Sutt created two courses at Dalmahoy near Edinburgh. He also designed Glenbervie. Braid felt the contours made the play interesting without being too strenuous, and the burn and spinneys could be utilised to advantage.

He extended Boat of Garten from nine to 18 holes in the 1930’s. Braid believed that a good course should look as natural as possible, retaining existing hazards and giving good views. He described his redesign as one of the prettiest he had ever done.

South of the border he designed Purdis Heath, Ipswich and North Hants at Fleet, the latter being outstanding both in layout and natural beauty. If working on a course within six mile radius of Walton Heath, Braid needed their specific permission before doing so.

He even designed a course in the USA, although he refused to travel there. Braid planned his holes based on a topographical map when redesigning for Saint Andrews GC near Hudson in New York. In Ireland he designed at least nine courses.

By the 1930’s Braid’s focus was on lengthening and remodelling courses, including Royal Aberdeen. Redesigns were necessitated by the arrival of steel shafts for clubs and the rubber cored ball.

His last full course was the new course for Stranraer on the shores of Loch Ryan in 1949. Braid’s last job was advising the Home Club of Hampton Court on bunkering.

It is significant that very few of his designs have been made obsolete by advances in technology.

Henry Cotton wrote of Braid in 1948 “He has a great eye for a golf hole and will cross a tract of virgin land and plot out golf holes as well as any man”.

My next article will focus on Braid’s forty six years at Walton Heath, and finish the series with some amusing anecdotes as recollected by the man himself!