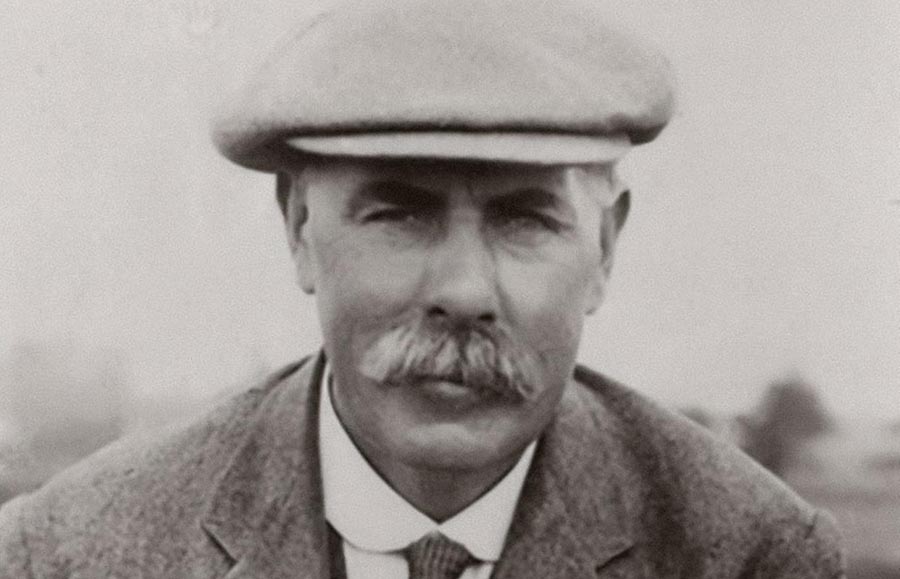 This is part of a series of articles on the golfing life of five times British Open Champion James Braid. Braid is a golf legend. Only Harry Vardon has won more British Open titles.

In my last article I wrote about the first two of Braid’s Open victories. This month I shall continue with his three additional claret jugs, and provide a brief summary to his remaining foremost achievements as a player.

The following year the Open returned to Muirfield. Could Braid successfully defend for the first time? His task was made no easier by being drawn to play in late afternoon on the two opening days. For the first time the Open was played over three days in an effort to accommodate a record entry of 183.

After an indifferent first two rounds, Braid found himself two shots behind with 18 holes remaining. He scored 73. Vardon four-putted the first and took six at the second. He finished five strokes behind Braid. Taylor’s poor driving and putting saw him finish four shots adrift of the now three times Open champion.

The 1908 British Open was played at Prestwick. After 36 holes Braid had a five stroke lead over Ernest Gray, with David Kinnell and Sandy Herd a further stroke behind. Braid had a shaky start to his third round. However, he began his recovery on the fifth hole, eventually reaching the turn in 39 strokes. He finished with a 77. Going into the final round Braid had a six stroke lead over Tom Ball and Ted Ray. With a crowd of several thousand watching, Braid’s final round of 72 provided a comfortable eight shot winning margin over Ball. He had won his fourth claret jug.

St Andrews 1910. Was this the week that history would be made, and Braid would win the Open for a then record fifth time? It would be an ideal setting, just a few miles to the north of his birthplace in the coastal village of Earlsferry.

It was strange however, that he played five full rounds before capturing the title. The weather changed rapidly on the opening day into a heavy thunderstorm. So severe was the downpour that many greens were flooded, in some instances the ball floating over the submerged hole. The committee finally declared that play was impossible and decreed that all scores were not to count. The championship would begin again the following day. Starting again the next day Braid returned a score of 76, but trailed by three shots to George Duncan, renowned for his speed of play. This was encapsulated in his book Golf at the Gallop.

On the second day he scored 73. After the third round Duncan posed a serious threat, taking the third round lead with a 71. He lost his short game and struggled with the putter in the final round, slumping to an 83 to finish third, five strokes more than Braid. Herd also held the lead during the final stages, but Braid’s closing rounds of 74 and 76 delivered his fifth Open title. He set a low scoring record of 299 for a St Andrews Open, which beat the previous best, by J.H. Taylor in 1900, by no less than 10 strokes! However, he now had failing eyesight, a condition that would see his time at the top draw to a close.

Braid also had four victories in golf’s second most important tournament of the era, the News of the World Matchplay. He also won a French Open, one of the oldest tournaments in professional golf. Braid completed his entire tournament career with hickory shafted clubs. Steel shafts did not become legal in Britain until November 1929.

In my next piece I shall write about Braid’s golf course architecture career.