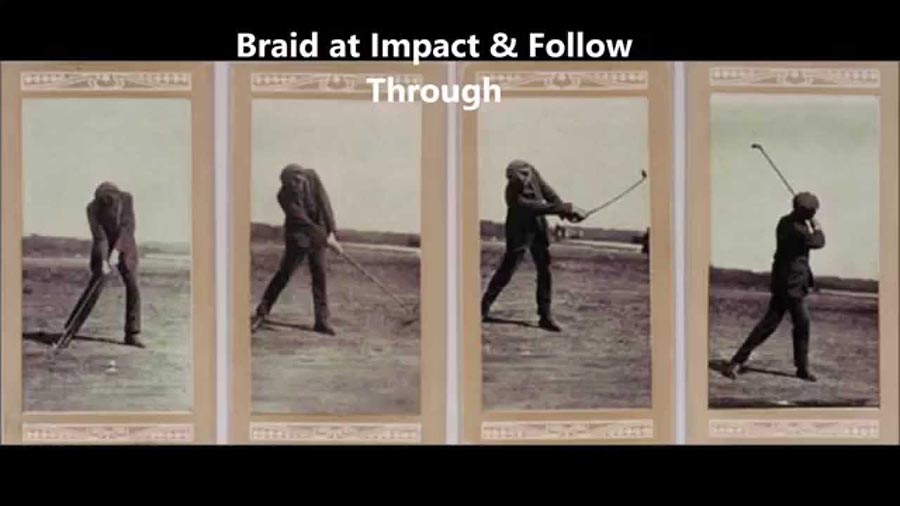 This is part of a series of articles on the golf life of five times British Open Champion James Braid. Braid is a golf legend -only Harry Vardon has won more British Open titles.

James Braid was born in Earlsferry near St Andrews on February 6, 1870. His father was also called James, and from the parish of Elie in Fife. His mother was Mary, from neighbouring Kilconquhar.

His first golf club was Earlsferry Thistle at Elie. Braid refers to his time at Earlsferry and Elie, stating that, “all about there it is all golf and everybody must pay [to play golf] unless he wishes to be taken for a crank, or as somebody with whom there is something constitutionally or mentally wrong.” He modestly stated that he was the same as any of the other boys at Earlsferry, although a little more precocious on golfing matters. From the age of five or six he regales that he was never to be seen outside his parent’s house without a club in his hand.

Braid spent time as a schoolboy caddying. His first annual caddie competition was at the age of eight. He played three times over the smaller three hole course, winning the junior class by 20 strokes! Jamie Anderson won the British Open Championship three times. He took notice of Braid from the age of nine. This was when Braid first saw Anderson compete in a professional vs amateurs match at Elie. Anderson told him that if he went in thoroughly for golf he should one day be Open Champion. Braid stated that he never had arguments with his parents over golf. However one would have to question that when he came home and told them of this conversation. In 1885 he attained what stood for a long time a record score of 40 over Earslferry’s 11 hole course.He became a scratch player at the tender age of 16.

Braid began his working life as a joiner,. He maintained those skills throughout his career without regret. He kept up his golf in the long summer evenings when the workshop was closed, or at holiday times. He left home to work at his trade at just 19, moving to St Andrews.

In 1891 he moved to Edinburgh, where he enjoyed plenty of golf on the Braid Hills, as a member of Edinburgh Thistle Golf Club. He played for the club in the Dispatch and Glasgow Evening Times trophy, the latter of which was competed for at St Andrews.

Braid turned professional in the autumn of 1893, thanks to a chance encounter on Princes Street, Edinburgh with his long time friend Charles Smith. As winter approached Braid left his employment in Edinburgh, and headed south with Smith. Braid began work as a club maker for Army and Navy Stores. At the time his new job was viewed as little more than a superior caddie. Neither his father, a ploughman to trade who never played the game, nor mother approved.

Braid first came to wider public attention in December 1895 when halving a 36 hole match with JH Taylor, another five time British Open Champion in his career, at West Drayton. Both played a brilliant game. In Taylor’s speech after the match he stated that he honestly believed he had never played a better game in his life than he had against Braid. He also acknowledged that the form shown by his opponent that day had been a revelation.

In 1896 Braid was appointed head professional at Romford Golf Club in Essex. His first professional victory in strokeplay came in an Open Tournament at his home club of Romford in October of that year. Braid was victorious against a strong field, including eventual six times Open Champion Harry Vardon, Jack White, JH Taylor, Ben Sayers and Sandy Herd. Braid was noted for the length and carry of his tee shots. Playing his cleek in the wind was also a strength of his. However, putting would always be his weakness.

In my next article you can read about James Braid’s early career in the British Open.