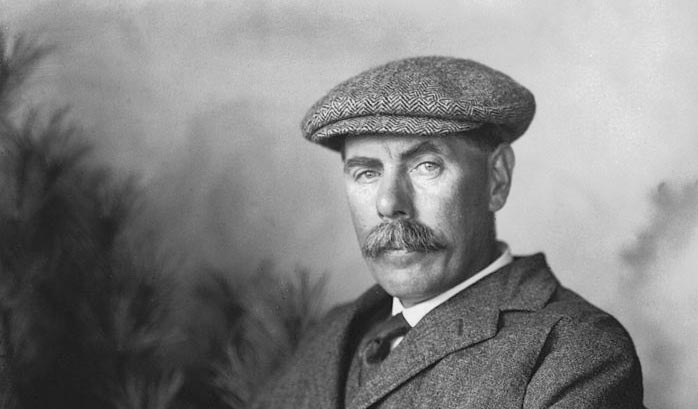 This is part of a series of articles on the golfing life of five times British Open Champion James Braid. Braid is a golf legend – only Harry Vardon has won more British Open titles.

Last time I wrote about James Braid’s early life. I shall now turn focus to Braid’s illustrious Open Championship career, during which he was champion on five occasions. Indeed, for fourteen consecutive years he finished no lower than fifth place. He made his debut at Royal St George’s in 1894, finishing a very creditable 10th. An injured hand forced Braid to miss the 1895 Open.

In 1897 at Hoylake, local amateur Harold Hilton prevented James from picking up his first claret jug by the narrowest of margins, a single stroke. Braid had it in the palm of his hands, needing only a five, five, four, four finish to win. However, he struggled. Standing on the 18th tee, a three was required to tie. His second shot is described in Bernard Darwin’s biography of Braid in a very similar a way to that of Watson’s on the seventy second hole at Turnberry in 2009. Has second shot came onto the green, and on, almost over the hole to end some 10 yards or so past. The putt to tie was a tricky one, and slid by the hole. It was not to be. I still maintain that Vardon kicked Watson’s ball through the green three years ago. Perhaps he had a premonition of greater things to come from Braid that day, and had higher powers do this for him in 1897!

Braid was also second in 1902, 1904 and 1909. In 1902 at Hoylake he missed a medium length putt on the final green to tie with Scotland’s Sandy Herd. He finished tied for second with Vardon. In 1904 he tied with Taylor, again a stroke adrift. This time of Jack White, who was the nephew of Ben Sayers. In 1909 he tied with Tom Ball, six shots adrift of Taylor.

The omens were good for Braid, heading into the British Open at Muirfield in 1901.The week before the Open he played in a tournament at Musselburgh. His record 36 hole aggregate of 140 lowered the previous record holder Willie Park’s score, set in 1892 by seven strokes!

This was the week he would finally challenge the dominance of Taylor and Vardon. He started atrociously. Braid’s opening tee shot cleared the boundary wall! However, with one round to play he was five shots clear of Vardon. Taylor was two shots further behind. With such a clear margin Braid played very cautiously for a final round of 80.

The approach he played to the final green resulted in a broken cleek, coming down hard on a piece of turf sticking up behind the ball. Away went the head of the club and a piece of the shaft with it. A curio hunting golfer went after it and claimed possession. His ball settled nicely upon the green nonetheless. Braid was victorious from Harry Vardon by three strokes.

Entries for the British Open at St Andrews in 1905 exceeded 150 players for the first time. This made it necessary to run the event over three days, a format which had first been tried at Royal St George’s the previous year. All entrants played 18 holes a day on June 6 and 7, and those within 15 shots of the leader completed a further 36 holes on the final day.

With an outward 38 in the final round Braid was well clear. However, the railway waited! The tall Scot’s second shot to the 15th finished beside the track. His recovery hit a spectator. He ran up a six. On the following hole his tee shot caught a fairway bunker. Tempted by the good lie he tried for the green. Braid’s ball went awry however, and scurried on to the railway line. The ball lay against a metal support between the lines. His recovery moved only a short distance. Braid’s next flew over the green.

Faced with a fiercely difficult pitch and run across the green, he picked his spot and left the ball only inches from the hole. Another six. Braid’s challenge was still intact and with two comfortable fives he finished the round in 81, five strokes clear of the second-place tie between J.H. Taylor and Rowland Jones.

In 1905 Braid also won the News of the World Matchplay at Walton Heath. The tournament was held at Walton Heath 16 times, from 1905 to 1969. In July of 1905 he returned a 70 on the course. At that time this was a record. In December he improved upon it with a 69. At that time an 82 was considered as playing to what we would refer to today as par!

In my next piece I shall write about his further British Open victories, and summarise his tournament achievements.