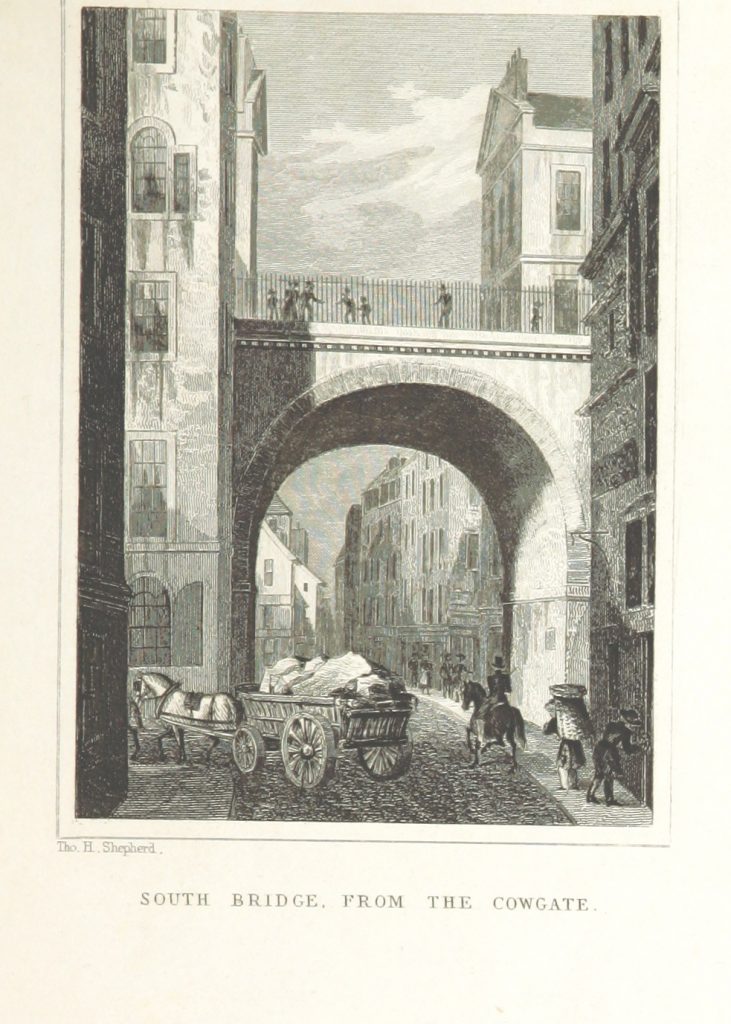 BACKGROUND TO THE SOUTH BRIDGE VAULTS

I’ll begin with some background to the South Bridge Vaults of Edinburgh.

The Cowgate barrier to the south of the Old Town ridge in Edinburgh prevented development of the southern suburbs. In 1785 the South Bridge Act authorised the construction of a bridge to address this.

The contract to build it was awarded to stone mason and architect Alexander Laing in February 1786. Plans by Robert Adam having been rejected as too elaborate. The South Bridge Foundation stone was laid on 1st August 1785 by Lord Haddo, Grand Master Mason of Scotland.

It was a monumental engineering project. The expanse of South Bridge was 1000 feet. Its’ highest point was only 31 feet above the ground. It penetrating the bed rock by 22 feet. South Bridge was to open for traffic in July 1788. For the opening ceremony Edinburgh Council chose the oldest female in the town to be the first to cross it. A problem ensued. She died before the day of the ceremony! Rather than chose the new oldest person in Edinburgh it was decided instead that the coffin of the deceased old lady make the ceremonial crossing.

LIFE BENEATH THE GROUND

Witchcraft had only been fully condemned to the pages of history earlier that century. The act of a deceased individual opening South Bridge resulted in many inhabitants viewing the bridge as being cursed. Initially they refused to cross it!

South Bridge comprises 19 arches. There is only one arch you can see, which is from the Cowgate. The South Bridge vaults of Edinburgh originally housed taverns, cobblers, a distillery and other trades. These vaults also afforded housing for the poorest people in Edinburgh. The vaults were soon abandoned however. This was because of rooms without windows, lack of sanitation and dampness.

During Victorian times the vaults were filled with rubble. This was to discourage nefarious uses. They were rediscovered by former Scotland rugby star Norrie Rowan. He excavated the rubble by hand, eventually enabling him to opened The Caves and the Rowantree bar venues in vaults south of the Cowgate.

Norrie’s rugby friends were numerous across the world, including former Romanian internationalist Cristian Raducanu. Norrie enabled Cristian to evade capture by the Romanian Secret Police by using a trapdoor within the Tron tavern. This led to the South Bridge vaults of Edinburgh. 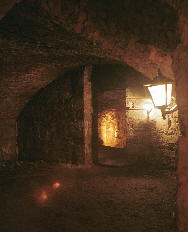 Want a private tour where you can hear all about the dark underbelly of Edinburgh? You will especially enjoy a Ghosts and Horrors tour with me.

Also,if you enjoyed this article you light also like my Murders on the Royal Mile blog piece.

South Bridge from the Cowgate

I am really enjoying your accounts. I come across to Edinburgh every few months and explore it a bit more, but there is so much more to lure me.