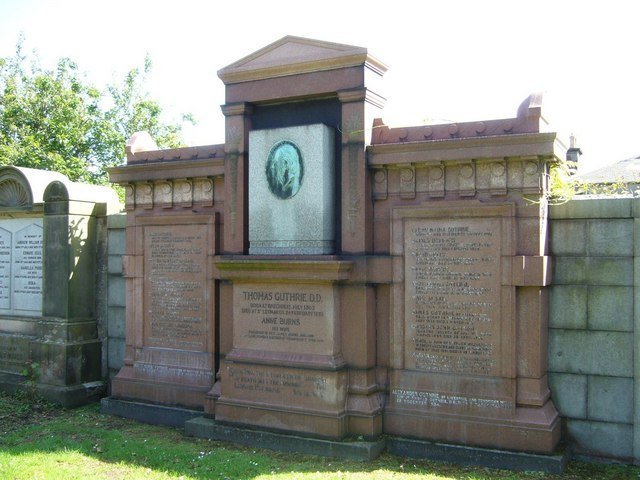 Rev Thomas Guthrie DD at   the time of the Great Disruption

Those who joined the Free Church of Scotland did so for reasons I will let the great Rev Guthrie explain himself, when he referring retrospectively to the Great Disruption in a speech to the Assembly in 1862 he said, “I look upon it as a serious calamity when the civil and church courts come into collision. We may yield to what we think wrong in civil matters, but we cannot yield to what we think wrong in spiritual matters.”

He goes on to state that whilst preparing to preach in a previous ministry of Strathbogie one Sabbath, he was handed a Court of Session interdict by a servant of the law, forbidding him to preach in either the body of a kirk or a graveyard. His response was that he acknowledged the law servants duty, and advised that he would do his. The penalty for breach of this interdict was “to get lodgings free gratis in the Calton jail”!

The Rev Guthrie put the interdict under his foot, and preached the gospel. He defied the law to punish him and did not.

He was one of the most prominent leaders of the Free Church movement. When he preached at Tanfield Hall the cheery tone of his voice was enthusiastically welcomed by the multitude who had attended worship there.

On 18th May 1843 he advised his parishioners, “I am no longer minister at St Johns (Cowgate). I understand that this day there has been a great slaughter in the Old Assembly” (Church of Scotland General Assembly). I know they have resolved to declare my church vacant. They may save themselves the trouble.” Stern words indeed.

The Rev Guthrie never regretted the Great Disruption. He cordially rejoiced in the fruits it had produced. Some twenty years from the final struggle, he stated “The right of a church to rule her proceedings by the ordinances of her own Divine Head are clearer to my eye than ever. We left the establishment for liberty, and liberty is sweet. We laid down our livings for it. We will never repent.”

The Rev Guthrie went on to prove more popular than ever.

The Rev Thomas Guthrie proved in his lifetime not only to be a man of good heart, but also one of very firm belief. Had he been a war leader, he would undoubtedly have led from the front with admirable zeal. He will always be one of my heroes. His grave can be seen at the Grange cemetery in Edinburgh.

Rev Thomas Guthrie was inspirational in educational social change in the mid-19th century. Read about his role in the creation of Ragged schools here

Come on an Old Town tour with me. See the location of the Free Church of Scotland – which came about as a result of The Great Disruption – and the site of Thomas Guthrie’s Ragged School nearby.

The image of his resting place at The Grange is taken from here.

[…] He had not however been minister at St Johns for long before the revolution of ecclesiastical arrangements which affected the whole of Scotland, the Great Disruption. […]