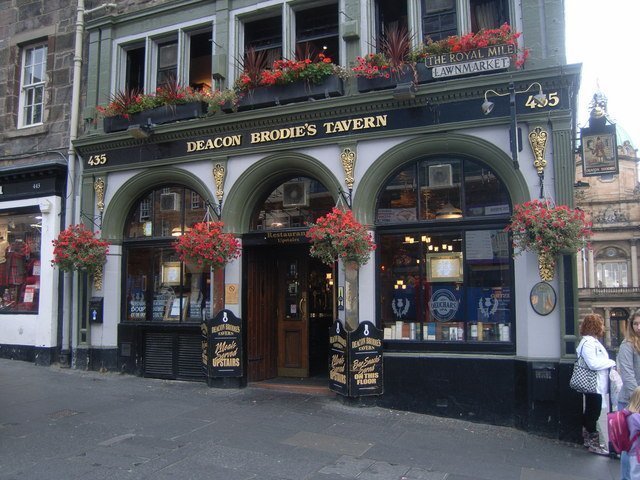 One of the most remarkable criminals ever confined in the Old Tolbooth of Edinburgh was Deacon William Brodie. Being a Deacon meant he was officially the most respected joiner in Edinburgh. He was also a town Councillor.

However, he had a habit of frequenting and gambling on cock fights. Brodie usually lost, running up significant debts. To pay them off he utilised his fine joinery skills. At that time, it was customary for shop keepers to hang their keys on their doors during daytime, in clear view of all.

Brodie would make impressions of them using clay. He then utilised the services of a local blacksmith who forged exact copies for him. This enabled Brodie to open the shops of his fellow tradesmen during the night, stealing whatever he wanted.

It was easy for Deacon Brodie to repeatedly enact such crime. It  made him an addicted burglar. He was never suspected until after a robbery on the Excise Office in Chessels’ Court in the Canongate part of the Royal Mile. As suspicion grew he fled to Amsterdam in Holland, where he was eventually captured and brought back to Edinburgh.

At his trial he was convicted and sentenced to death, along with his accomplice Smith. In his cell he cut out the figure of a draughtboard from the stone floor. Brodie amused himself by playing anyone who would join him. If alone Deacon Brodie would play his right hand against his left.

His deportment at the gallows on 1st October 1788 displayed a mind at ease. This fuelled suspicion that Brodie’s modification of the gallows he had made mechanical adjustments which would save his life.

However, Deacon Brodie proved the excellence of his improvements – the substitution of the scaffold for the ancient practice of the double ladder. He appeared to view the result of his ingenuity with great satisfaction. As he was placed on the small pedestal at the top the executioner placed the rope around his neck. William Brodie remained calm, looking somewhat aloof as he viewed the mass of spectators below. He exited the world with his hand stuck into the open front of his vest.

His true story inspired former Edinburgh citizen and novellist, the world famous Robert Louis Stevenson to use Deacon Brodie as the basis for Jekyll and Hyde!

Curious to see for yourself the sites of his workshop, execution and the location of his final crime? Discover Edinburgh with me as we explore the Old Town. In fact, why not make a day of it. After an Old Town lunch we can wynd our way through the Canongate, uncovering the amazing true stories it has to offer, as well as being the location of Brodie’s final criminal act. Both tours can be seen here

Great tale, many thanks Fraser I hope you enjoyed yesterday’s Rattray anniversary dinner.